I have reviewed the book, Amazon SimpleDB Developer Guide by PACKT publisher, which got released last month. Amazon SimpleDB is a schema-less, highly scalable datastore which provides eventual consistency. 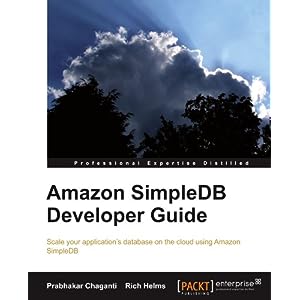 This book introduces developer’s to SimpleDB API & libraries in different languages, Java, PHP & Python. It discusses the differences between relational databases and SimpleDB, and how to deal with the No SQL, No Schema paradigm. It also dwells into profiling requests based on the execution times and box usage statistics, and adding cache layers using memcached.

During the development process, there would be a lot of focus on exception handling mechanisms. The intention is to deduce or arrive at the cause for any failure with minimal effort. Nevertheless, there could be situations where you end up debugging or not able to debug bad stack traces which hardly give any information about the cause of the failure. In this post, I would like to focus on these situations and discuss possible solutions to fix such bad stack traces.

Dynamic proxy invocation is a well established pattern in Java. Especially, Containers that provide middle-ware services use this pattern extensively to intercept the calls and embed their services.

Let us take a look at the invocation of dynamic Proxy instances and the stack traces of exceptions thrown during invocation.

In the above example, dynamic proxy instances are created for Customer and Administrator interfaces, and implementation for login() method is provided by the LoginProvider invocation handler. LoginProvider throws a LoginException when there is any failure during login, as shown below.

When you look at the above stack trace, first thing that comes into mind is “why did login fail?” and “who is trying to login?”. You can figure out why login has failed by looking at the exception message or the cause, but you can never get to know whose login has failed. In the above stack trace, you can see that the “$Proxy” masks information about Customer or Administrator interfaces, giving no clue on whose login has failed. Unless we have the source for LoginProvider we can’t deduce the problem, as we need to figure out the whereabouts of proxy’s creation and the interfaces it implements. Now, this becomes even harder if the interfaces implemented by the Proxy are read from configuration (Xml/Annotation etc.).

Many a times though there is enough flexibility in the programming language, we would hardly find a way to make use of it. One such a thing is modifying stack trace of an exception and we can explore this feature to fix our bad stack trace.

Understanding the above exception stack trace is really difficult for end users, system administrators or developers. Instead, if we can replace “$Proxy” with useful information like interface name, deployment name or JNDI name then we can quickly relate the problem to the component that has failed.

In the above stack trace proxy’s occurrence has been replaced with the interface name it implements. Now, you clearly know whose login has failed by looking at the stack trace. Someone can immediately point out that instead of tweaking the stack trace it would have been better to improve exception messaging and if required wrap the exception to contain relevant information. Yes, actually there is a trade-off between wrapping the cause and tweaking the exception stack trace. The trade-off with the tweaking approach is you can put up a generic stack trace manipulator without much knowledge about the exception. Where as in the other case we need to understand each type of exception and do the necessary wrapping.

Exceptions from a JSP page

How do you debug exceptions thrown when you access a JSP page? Aaahh..! Its a terrible pain to look into the generated servlet java files and relate the failure to the JSP line number. Some of the JSP containers support JSR-45, Java Debugging Support for Other Languages, to map the generated servlet java line numbers to the JSP line numbers and vice versa (through SMAP). This information is embedded into the servlet class file and is useful to debugger tools to track the line numbers of the JSP page back, when the servlet gets executed behind.

SMAP information is actually available to the JVM, but unfortunately VM doesn’t generate the stack trace based on this information. There is a bug reported for this issue and you can vote for this. Hence, JSP Containers need some way of transforming the exception stack traces to contain JSP line numbers, making it more readable to an end user. One of the ways could be the above suggested method to use setStackTrace() to post-process the exception stack trace after it has been raised.

Another similar use case where we need a readable stack trace is, when the code is Obfuscated. If the obfuscation tools support JSR-45 and provide the obfuscated code to the original code line number mapping through SMAP, then we would have cleaner stack traces along with debugging support for obfuscated code.